Twice this week I’ve read that the word “resurrection” literally means “to stand up” or “to stand again.” Two days this side of Resurrection Day, I thought it fitting to share an excerpt from a new book that’s helping women stand up. 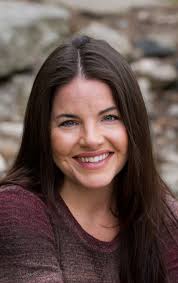 The book is Dare Mighty Things: Mapping the Challenges of Leadership for Christian Women by Halee Gray Scott, PhD, an author and independent social researcher who focuses on issues related to leadership and spiritual formation. I met Halee through Redbud Writers Guild and I admire and appreciate her and her writing. I think you will too.

Christian women have been shamed into a corner. Many have bought the lie that they are the second sex—they do not matter and they are not gifted, at least not in the ways that matter most. They got the message that they need to limit their horizons, temper their ambitions.

They are leaving. Research shows not only are there less women in church, there are less women going to seminary. Women’s advancement in leadership has altogether stalled, right along with the wage gap. Women, especially Millennial women, see this lack of progress and start to wonder if leadership is even worth it. So they look for “the good life” elsewhere. As the French say, “Ça ne vaut pas la peine.” It is not worth the pain. 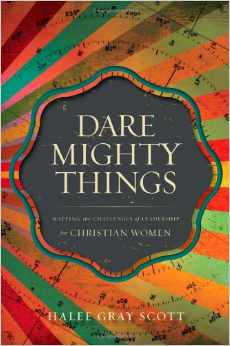 It isn’t enough for me to simply tell you the stories of Christian women who are daring mighty things and outline the challenges you will face, so let me tell you this:

Your life matters. We can learn from our ancestors, from Christian women who dared mighty things and brought about massive cultural reform. It was not too long ago that women in the nineteenth century, women with far more limitations than we have today, worked to abolish slavery, alcoholism, poverty, illiteracy. They created legislation to prevent women from being sexually exploited by men, built homes to keep them safe, and provided aid to immigrants.

You are gifted and called. The Lord can do more than you can possibly imagine through your life.

You are needed. The same problems that confronted the women of the nineteenth century confront us today. Women are still exploited by men. Slavery is not abolished for all. Fifteen million children go to bed hungry every night in America alone. We can find the good life by daring mighty things, by overcoming our personal challenges in order to make a good life for others.

God is working through Christian women. The first challenge for most Christian women? Believing you are a leader at all. Believing you have gifts. Believing that God wants to use your life as a force for good. Not every woman is called to be a pastor, a minister, or a CEO of a non-profit. Some women are called to lead in other ways—leading an at-home Bible study, starting a food pantry at their church—but these women are leaders, too, and their contributions have been minimized for far too long.

There is no passion to be found playing small – in settling for a life that is less than the one you are capable of living.

My article “Why We Need to Read More Women: Our book choices reveal whose influence we value and whose we don’t” was published by Relevant magazine today.

“It’s a truth universally acknowledged that, although women read more than men, and books by female authors are published in roughly the same numbers, they are more easily overlooked,” Joanna Walsh wrote in a column in The Guardian last week.

And it seems she’s right. Though we can all think of a few women authors we love, most of our bookshelves seem to be laden with material mostly from male authors.

There’s more evidence of this beyond our own bookshelves. Vida, an organization that counts the number of times women and men are published in many of the world’s “most respected literary outlets,” publishes an annual “Count” with pie charts and reports of gender imbalance in the writing world. The numbers are sobering.

Blogger Rob Carmack recently lamented the fact that many Christians, especially Christian men, miss out on the powerful voices of women because they refuse to read what they refer to as “girl books” (books by women authors). Carmack believes part of the problem lies with Christian publishers that market books authored by women almost exclusively to women, in cover design and promotion. But Carmack has chosen, quite literally, not to judge a book by its floral or pastel cover in order to read more books by women. In doing so, he’s encountered compelling and insightful voices such as Rachel Held Evans, Sarah Bessey, Shauna Niequist, Sarah Cunningham, Susan Isaacs, Lauren Winner, Nadia Bolz-Weber and more.

In his post, Carmack specifically challenges Christian men to read more women authors. “It’s not just about equality or fairness—it’s about being part of a vibrant, relevant conversation,” he said. “If you want to miss it, that’s your choice, I suppose. As for me—not only for myself, but for my wife, my daughter and my son—I will listen to these great voices, and I will continue learning from what they have to say.”

I wanted to stand up and cheer when I read those words, but I also felt compelled to examine the male/female author ratio of the books I had recently read to see if I too needed to take up his challenge to read more women authors. Women’s bookshelves are certainly not immune to gender imbalance, since Christian women are as likely as men to hear messages that devalue the voices and influence of women, both within the Church and in the culture at large.

That’s why voices like Carmack’s, which acknowledge they have much to learn from those whom their culture (and Christian subculture) has marginalized, are so important. There’s a beautiful Kingdom-of-God quality to voices that question the status quo and confront culturally ingrained systems of power and privilege.

And giving equal weight to male and female voices is important in all areas of life, not just literature. Marriage researcher John Gottman found that husbands who are willing to be influenced by their wives experience happier marriages than men who resist their wives’ influence. His research revealed that the happiest, most stable marriages were those in which the husband respected his wife and willingly shared power and decision making with her.

This research isn’t surprising, and its implications seem to extend beyond the realm of marriage relationships. Even a cursory glance of the Gospels reveal that Jesus was a man who treated women with respect. Have you noticed that the healthiest and strongest men, the most whole men, the men who most resemble Jesus are the ones who respect, befriend, learn from and empower women?

These men see through counterfeit perceptions of masculinity that equate maleness with dominance. They refuse to be gatekeepers of male privilege and the “good ol’ boy” network, and if that means having to endure insults and attacks on their “manhood,” they do so.

The hope for the Church is that men and women will relate to each other from a posture of love rather than fear, realizing that God’s Kingdom is not a Kingdom of scarcity, but abundance. God’s table is big enough for all of us and all our voices.

The author of Genesis said that God created us—male and female—in God’s own image. When we intentionally or unintentionally cut ourselves off from listening to half of the world’s population, we miss out on the fullness of God.

The next time you’re on Amazon, notice the authors of the books in your browsing history. Notice the books that Amazon is recommending to you based on your history. If there are few or no women on your lists, you’ll face a decision: You can react defensively and try to convince yourself that your predominantly male library is in no need of change. Or you can see it as an opportunity to grow your library and yourself, and experience more of God as you embrace all the bearers of God’s image.

Rachel Held Evans recently posted a list of 101 Christian Women Speakers, many of whom are also writers, authors and bloggers. If you need a place to start, this is a good one.